Portuguese super-agent Jorge Mendes is rarely shy when it comes to extolling the virtues of his elite clients. It is part of the job, of course, and one of the reasons that stars like Cristiano Ronaldo continue to place their trust in the wily businessman to take care of their affairs.Last week, however, Mendes made a fairly startling assertion that immediately sparked widespread debate. At its heart was Ronaldo, fresh from adding to his already impressive goal tally for the Portugal national team with a landmark strike, and none other than Pele, owner of the biggest – and, for many, most contentious – scoring record in professional football.“His numbers don’t lie and light up the overwhelming way Cristiano Ronaldo shatters records, which elevate him to the category of the best player in the history of football, with a big difference compared to the second [best] for all he achieved with the different clubs he represented, whether in England, Spain or now in Italy and also with the Portuguese national team,” Mendes beamed to Tuttosport when quizzed on his client. Article continues below Editors’ Picks Ox-rated! Dream night in Genk for Liverpool ace after injury nightmare Messi a man for all Champions League seasons – but will this really be Barcelona’s? Are Chelsea this season’s Ajax? Super-subs Batshuayi & Pulisic show Blues can dare to dream Time for another transfer? Giroud’s Chelsea spell set to end like his Arsenal career “The fact is that, with Cristiano Ronaldo, Portugal have already played in three finals, winning two of them.“Cristiano has reached the remarkable milestone of 700 goals, but I have no doubt that he’ll surpass Pele as the best scorer in football history, and he’ll do it with Juventus.“After all, 68 goals aren’t a lot for this extraordinary Cristiano Ronaldo, are they? It’s also because I’m convinced that his best is yet to come.” 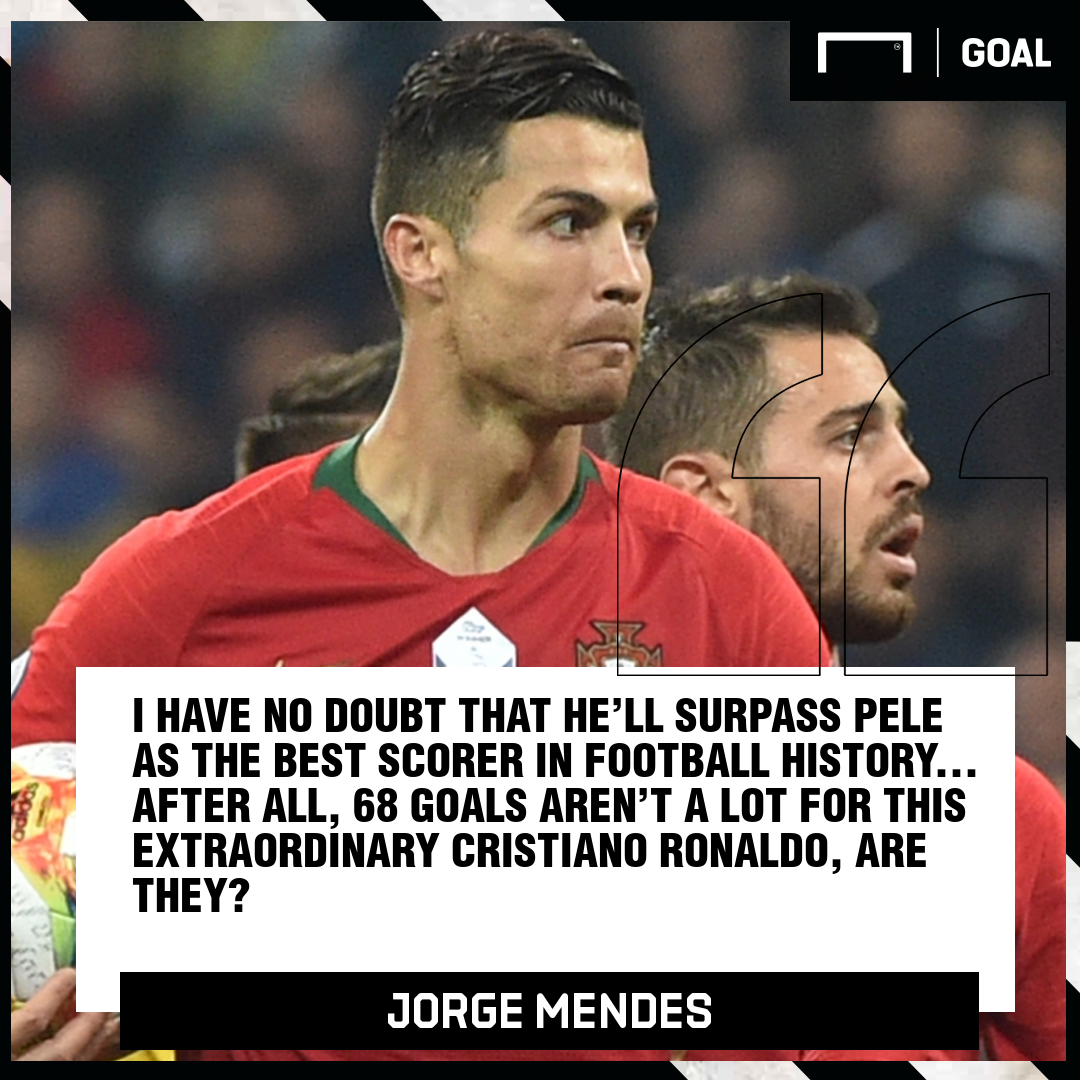 As emphatic as Ronaldo’s strike-rate is – and, thanks to Saturday’s strike against Bologna, his tally now stands at 701 – it still takes a rather optimistic observer to see him surpassing the Brazilian great in these last years of his career.Pele is credited with no less than 767 official strikes, during his time with Santos, the New York Cosmos and the Brazil national team. If one includes the myriad friendlies, tours and exhibition matches O Rei played during the two decades he ruled the roost in world football, that number famously rockets to 1281 goals, a figure that realistically will never be reached by any modern footballer.The validity of Pele’s outrageous statistics almost 60 years on has of course been called into question from time to time. Not content with brushing aside that haul of unofficial goals – in a very real sense, football’s prototype No.10 was a victim of his own success. His Santos side were taken across the world by clubs desperate for a glimpse of the star, whatever the cost – and those doubters also point out that he never played in Europe, padding his record books across the Atlantic Ocean in supposedly weaker competitions such as the Sao Paulo State championship.One irate Barcelona fan, angered by Pele’s criticisms of Lionel Messi, even went as far as to detail the ‘weak’ opposition the legend faced in a Twitter thread titled: “Pelé: the biggest fraud in football history”. The thread, since deleted, went viral but such insults cannot help but be wildly off-target.The Paulista championship, it is true, has a varied level of competition, mixed as it is between Sao Paulo’s heavyweights and regional amateur clubs. But in Santos, Sao Paulo and Corinthians it also boasts three club world champions, as many as Spain and Italy, and more than England.From Pele to Neymar, Socrates to Careca, Rai and Gabriel Jesus, the regional championship has helped many a Brazil star cut their professional teeth on their way to stardom. The goals may have flowed, but with so many top performers dotted around Sao Paulo’s state elite, the 10 titles Pele helped Santos lift were a unique, brilliant achievement. 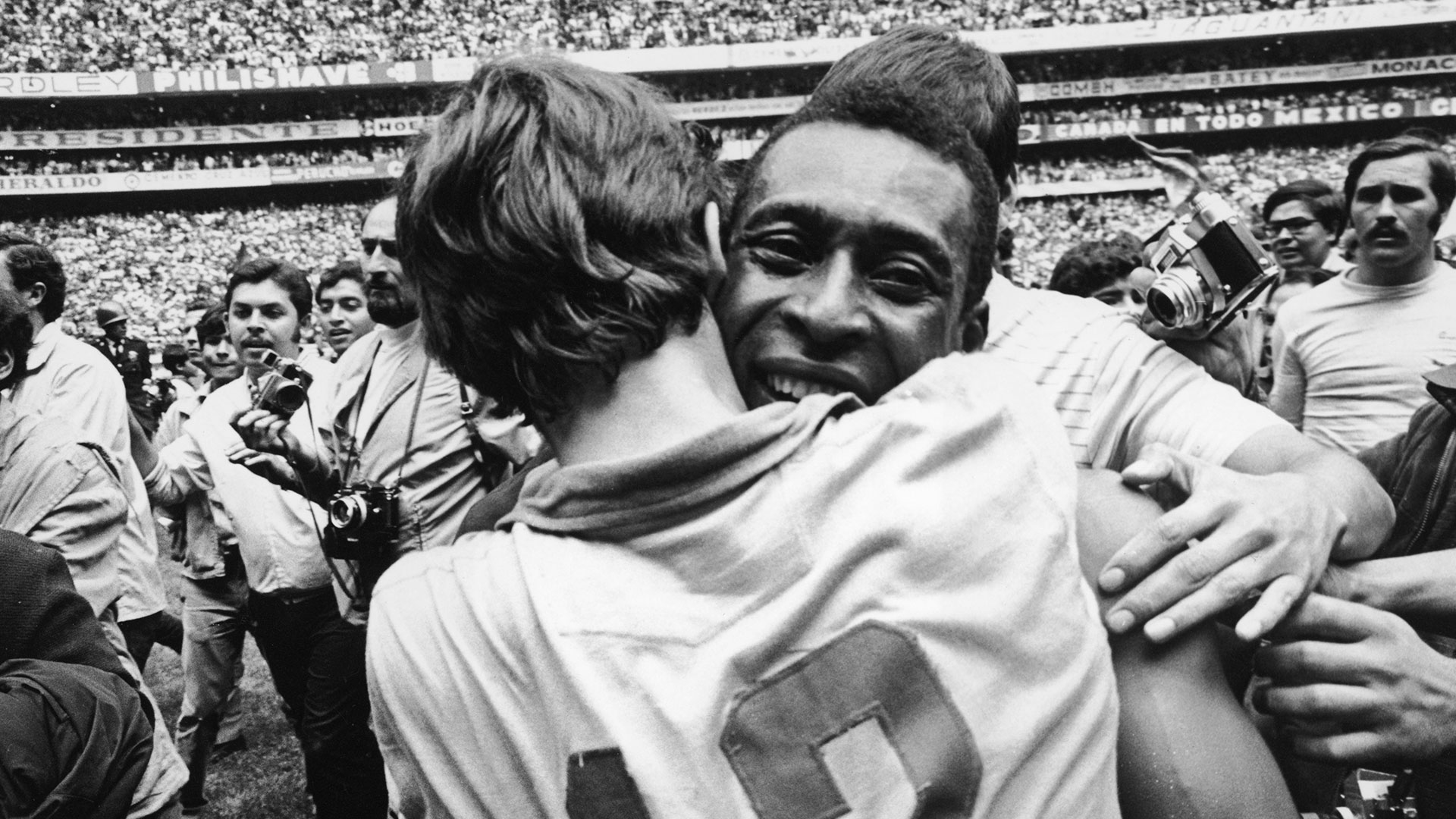 If one wishes to talk about levels of competition, too, it is also worth taking a look at Pele and Ronaldo’s respective records at international level. The Portuguese idol has scored 95 with his nation, more than any other player currently active and topping Pele’s 77, but in terms of opposition he is open to the same criticism often levelled at O Rei.Among his tally are five hit past Andorra; another five at the expense of Armenia and Latvia; four against Luxembourg, Lithuania, Hungary, the Faroe Islands and Estonia, all of whom are far from being considered amongst even the middle-ranking nations of international football. Just four of Ronaldo’s 95 goals have come against a previous World Cup winner and none at all in the knockout phase of that competition.Pele, too, boasts goals in four different World Cups, but he can also point to two final strikes and three winners’ medals. And, while Ronaldo has taken full advantage of the lop-sided nature of UEFA qualifying competitions to boost his own figures, the Brazilian’s strikes were overwhelmingly against top-drawer opposition: six goals against Argentina, further strikes to take down France, West Germany, Italy, England and the great Eusebio’s Portugal team.All that while playing in an age of often blood-curdling physical violence. It is fair to say that, while Ronaldo stars at a time when goals are rather scarcer than in the 1960s and 70s as football has become a more closed sport, the Juventus No.7 has never faced a vicious tackle like the ones against Bulgaria and Portugal that put Pele out of action in the 1966 World Cup.Ultimately, as one hopefully will have seen for the reasons espoused above, such comparisons between generations are extremely difficult to draw firm conclusions from. Ronaldo will go down as one of the greats of his time and certainly as a fabled goalscorer, whether or not he musters the 67 strikes he needs to overtake the Brazilian legend. No matter how many goals he finally nets when the time comes to hang up his boots, he is destined to join Pele in football’s pantheon of all-time legends.